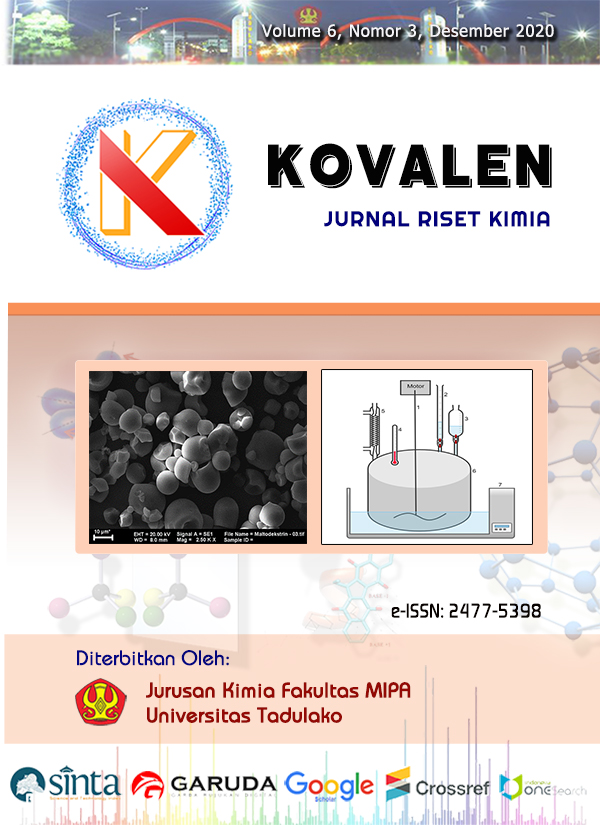 Iron rust was an iron oxide compound that was less attractive, dirty, brown in color, and could pollute the environment, causing water to turn brown. To minimize iron contamination, conversion was carried out into iron (III) sulfate which was useful as an adsorbent for textile dyes. The purpose of this study was to determine the effect of sulfuric acid concentration and volume of H2O2 10% used to convert iron rust into optimal iron (III) sulfate compounds. The method used was a laboratory experiment on a batch scale and the hydrate content in iron (III) sulfate was carried out by the gravimetric method and its ability as an adsorbent was carried out based on the adsorption of dyes using the spectrophotometric method. The results showed that a reactor filled with 3 grams of iron rust powder and 100 mL of sulfuric acid was stirred at 425 rpm at 80 0C for 30 minutes, added 15 ml 10% H2O2 followed by stirring and heating until the solution was saturated, cooled to form crystals. The crystalline yield in these conditions was the increase in sulfuric acid concentration which resulted in low process efficiency, namely 30.34% at 50% sulfuric acid concentration and 15 mL 10% H2O2. The addition of 10% H2O2 solution to 50 mL of 20% sulfuric acid solution and 3.0 grams of a carat as much as 5 mL-10 mL 10% H2O2 produced iron (III) sulfate with 26.53% process efficiency. Iron (III) sulfate is a white, light gray crystal with the chemical formula Fe2 (SO4)3.5 H2O which was a rhombic shaped crystal. and able to absorb the dye which showed that 1.0 g of iron (III) sulfate was able to absorb the highest amount of red dye in a volume of 100 mL of textile dye solution.